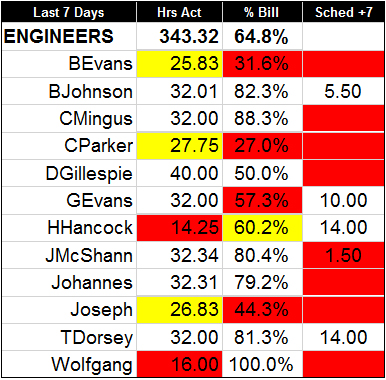 This report shows what hours engineers (marked as "include in utilization" in the Members table) have reported, how many of their hours reported were marked as "billable", and the number of hours that Dispatch has already scheduled for each engineer. Default scope for the report is 7 days (both backward and forward), but the number of days can be adjusted as a parameter of this report. Also the number of "required" scheduled hours for each engineer defaults to 5 but can be modified via a parameter. Hours reported and percent billed are compared to the corresponding entries in the Member table for each engineer. Achievement of the targets results in "white" background. Yellow backgrounds indicate achievement of 80%-99% of the target. Red background entries indicate achievement of less than 80% of the goal.

WHY IS THIS IMPORTANT?

If engineers are not reporting their time, then you cannot bill for that time. This is important even if the majority of your clients are on fixed-fee contracts, since it impacts any overages that are NOT covered in the contract, as well as how your engineers are spending their time. The %Billable shows if the engineers are working on items that actually have an impact on revenue for the organization. Finally, the Hours Scheduled column is important to aid the engineers in "knowing what to do" and to minimize the amount of "transition time" from working one ticket to the next.

Engineers – Shows a list of all engineers who are marked as "Include in Utilization" in the Members screen in ConnectWise.

Hrs Act – Shows the number of "actual hours" that each engineer has recorded. Those amounts are compared to the "hours capacity" entry in the ConnectWise Members screen.

%Billable – Shows the percentage of time marked as "billable" versus the actual hours entered. Any rounding of the billable hours occurs BEFORE the percentage is calculated. Actual hours are not rounded. Resulting percentage is compared to the capacity utilization target defined in the ConnectWise Member screen for this engineer.

Sched + 7 – Number of hours that Dispatch has already "scheduled" this engineer to work in the next 7 days (number of days can be varied). Target number of hours to be scheduled defaults to 5 hours, but can be changed via a report parameter.